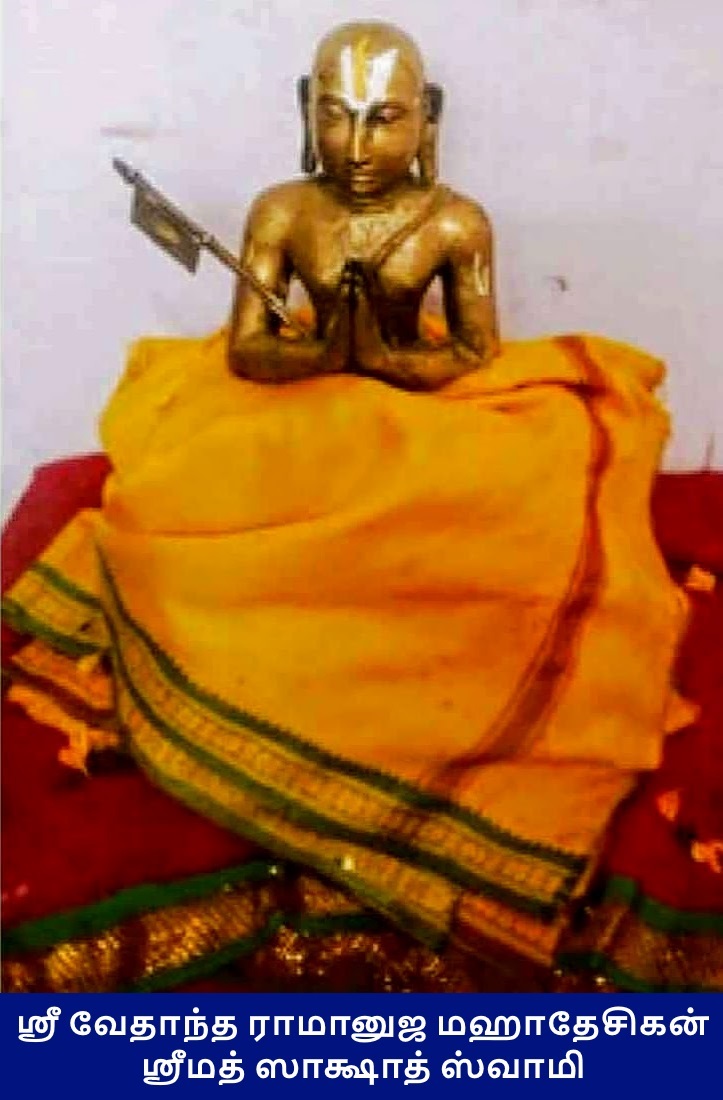 Sri Sakshat Swami was born in the Tamil month of Chittirai on the day of Thiruvadhirai nakshatra (the same day as Bhagavad Ramanuja) to Srinivasacharya in the village of Kondal near Thirunarayanapuram in the 17th century.

On the day of Swami’s avataram, the temple procession with the utsava-murti of Udayavar (Ramanuja) arrived in front of his house. While his father was busy serving the utsavar of Udayavar, a few well-wishers informed him that a son had just been born to him.

Srinivasacharya Swami did not make such a statement only because his son was born on the same  Thirunakshatram day as Bhagavad Ramanuja. He was an expert in jyotisha-shastra and had predicted that soon, his son would renounce everything and accept the renounced order of sannyasa.

Sakshat Swami entered grihasthashramam only to fulfil the orders of his father, who wanted ‘vamshavruthi’ or continuation of his line. However, he remained totally detached and full of vairagyam even during his family life. As soon as his promise to his father was fulfilled by begetting children, he immediately went to the temple of Mannarswamy and took sannyasa with the name: Vedanta Ramanuja Mahadesikan.

After entering turiyashramam, Sakshat Swami went to Srirangam , where he lived on the banks of the Kaveri in a mood of great vairagyam and virakti. He did not even have a roof over his head, and lived on minimal bhiksha-aharam. He was relishing the internal experiences of the Sri Suktis of Bhagavad Ramanuja and Vedanta Desika so much that they had become his main aharam. Thus he spent his time preaching the glories of Ramanuja-siddhanta through the divya suktis of Vedanta Desika to those astikas who flocked to take shelter of his lotus feet.

Sakshat Swami used to get up very early to take his holy dip in the river Cauvery at Sri Rangam. Once an envious person who wanted to make fun of Swami, came near him and polluted the water around Swami. To the surprise of the mischief maker, Sakshat Swami did not utter a word, but simply left for another spot which was cleaner.

The mischievous person kept following Sakshat Swami to pollute the water around him, and every time Swami would quietly go to another spot without arguing with him. Finally the mischievous person got tired and asked Swami why he was not getting angry even though he was troubling him so much.

Swami told him that his dip in the holy Cauvery at dawn was ordained by the sankalpam of Lord Ranganatha. But the very same Ranganatha resided in the heart of the mischievous person as antaryami. If he had not stopped him from polluting the water, then it was the Lord Himself who was responsible for making him pollute the water since the Lord had not stopped him. Therefore how could he get angry at the Lord by expressing disappointment to the mischievous person?

The mischievous person fell at Swami’s feet and accepted him as his Acharyan, acting as Swami’s bodyguard from that day. Later, he offered his entire life savings to Swami, who refused to accept the money. He told the man to put the money into the Cauvery so that everyone could benefit from this act.

The man was puzzled by Swami’s instructions, and sought guidance from his disciples. They instructed him to renovate the Amma Mandapamin on the banks of the Cauvery. This was what Sakshat Swami had meant: to put his money in the Cauvery so that pilgrims and residents could safely use the steps on the banks to bathe in the river without trouble.

Swami wrote many books, but one of the most important amongst these is the Sri Tattva Siddhanjanam, in which he establishes the supreme and primal position of Piratti alongside Perumal in an irrefutable manner.  His magnum opus is the commentary on Bhagavdvizhayam Aarayirappadi (which in itself is a commentary on the Thiruvaymozhi), with references that strictly followed the concepts of Ramanuja  in his Sri Bhashya and Gita Bhashya, with explanations from verses written by Sri Vedanta Desika. Sri Sakshat Swami’s commentary is named Irupatthu Nalayirappadi.

Sakshat Swami was immensely pleased with Thirukkudanthai Desikan, and after testing his disciple’s jnanam (spiritual knowledge), anushtanam (sacramental practices) and bhakti (devotion to the Lord), and accepted him as a sishya.

One day Lord Aravamudan appeared in a dream and informed Srimad Thirukudanthai Desikan that three yatis (renunciates) who were the amsha-avataras (partial incarnations) of Sri Nathamuni, Sri Yamuna Muni, and Sri Ramanuja Muni would arrive with a request to become his disciples. The Lord further instructed him to accept them as his sishyas and teach them the esoteric mysteries and teachings of the Munitraya sampradayam, established and passed down by the three great munis: Nathamuni, Yamunamuni and Ramanuja Muni.

Similarly, the Lord appeared in the dream of the three swamis and told them to accept sannyasa or the renounced order, and proceed to Thirukudanthai to become disciples of Srimad Thirukkudanthai Desikan. The three Swamis  were:Sri Srinivasa Mahadesikan of Cheyyanam, Sri Ranganatha Mahadesikan of Vathiyairuppu, and Sri Vedanta Ramanuja Mahadesikan (Srimad Vazhuthur Andavan).

Thus the glorious tradition established by Sakshat Swami, was nurtured through the compassion and grace of Srimad Thirukkudanthai Desikan. The foremost of Thirukkudanthai Desikan’s disciples was none other than Srimad Vazhuthur Andavan, from whose divine benediction, the Srirangam Srimad Andavan Ashramam was established, and now continues to protect and propagate the Sri Vaishnava tradition all over the world.