“I prostrate at the holy feet of Srinivasa Mahadesikan (Akkur Andavan), who is blemishless, and possesses saintly qualities such as affection and simplicity; who had gained the esoteric mysteries of ubhaya-vedanta at the lotus feet of Srimad Nammandavan; who was benedicted by Srimad Nammandavan with atma-bharam (ritual surrender) conducted at the divine lotus feet of Lord Varadaraja of Kanchi; and who propagated the teachings of the eternally rich Sri Vaishnava tradition that had been nurtured earlier by Srimad Periandavan.”. 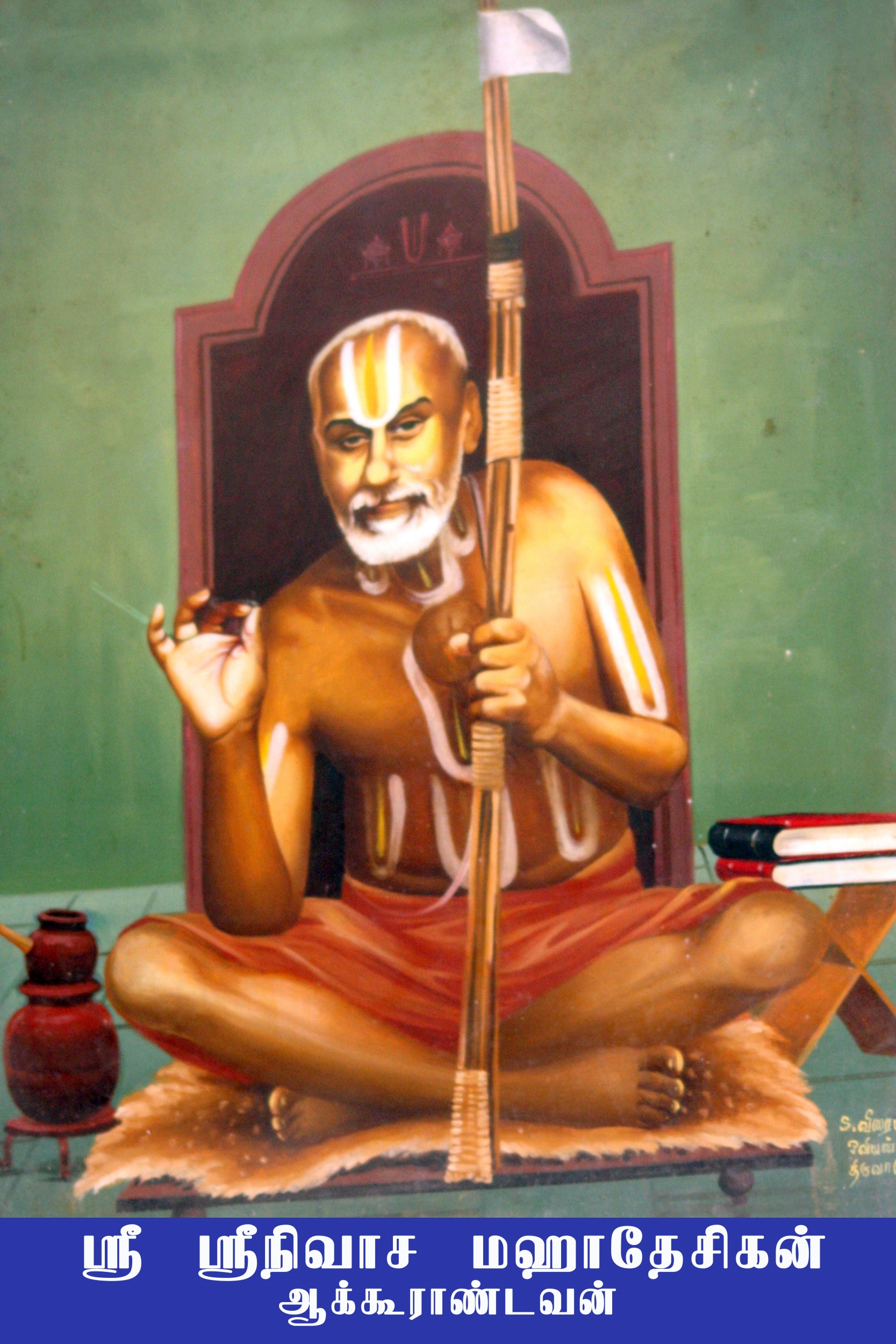 Akkur Andavan was born in the year 1880 corresponding to the sashti-samvatsara year of Vikrama in the Tamil month of Purattasi under the birth-star Uthirattaathi. At birth, he was given the name Rangachariar.

In 1931, when Srimad Nammandavan’s health started to deteriorate, he decided that it was time to appoint a successor for the Ashramam. He wanted Srimad Akkur Rangachar Swami to be his successor, and lead the Andavan sampradayam.

However, out of great humility, Srimad Rangachariar Swami hesitated because he thought that he may not be a fit person to adorn the acharya-pitam of the Ashramam. This was his mood of total humility as he was influenced by the transcendental qualities of Srimad Nammandavan such as jnanam (spiritual knowledge), vairagyam (material detachment) and anushthanam (strict adherence to religious duties).

Therefore he respectfully declined to accept the sannyasa order of asceticism at that time.  Srimad Nammandavan was very concerned that he could not yet appoint a worthy successor, and immediately offered prayers to the Lord, His padukas (holy sandals) and the purvacharyas (previous preceptors).

With tears in his eyes, Srimad Nammandavan chanted several prayers, and repeated one verse again and again: sriman abhishta varada tvam asmi sharanam gatah ( Oh Lord Varada, the giver of auspicious boons, who is always accompanied by Sri Mahalakshmi. I have now completely surrendered at Your lotus feet by performing bhara-samarpanam).

Thus, Srimad Namandavan prayed again and again to Lord Varadaraja and His eternal consort Sri Perundevi Thayar. He fervently appealed to the Lord: “Hey Prabho (my master)! You fulfilled the prayers of Sri Alavandar by making Sri Ramanuja the sampradaya-pravarthakar (guardian of the Sri Vaishnava tradition). Now fulfill my prayer by making Akkur Rangachar Swami the sampradaya-pravarthakar of the Andavan Ashramam, and my worthy successor. This responsibility is now yours.”

After this, Srimad Nammandavan departed to adorn thiru-nadu (the divine abode of Sriman Narayana).

In this way, the Supreme Lord Varada fulfilled the wishes of Srimad Nammandavan in the same way that He had earlier fulfilled the desires of Alavandar.

Srimad Akkur Andavan’s fame grew far and wide as his qualities of jnana, vairagya and anusthanams resembled those of Srimad Periandavan. In 1931, he started on a sancharam-tour (pilgrimage) on foot which lasted fifteen years. He travelled all over Tamil Nadu, Andhra and Karnataka and spread the glories of the muni-traya sampradaya to which the Andavan Ashramam belongs.

Many illustrious scholars undertook their grantha-chatushtya-kalakshepams (personal tutelage of the four main esoteric texts of Sri Vaishnavaism) under the shelter of Srimad Akkur Andavan. Amongst them were two great saints who later adorned the acharya-pitam of the Ashramam: Srimad Thenbirai Andavan and Srimad Thirukkudanthai Andavan.

Once Akkur Andavan had to undergo surgery to remove a cyst from his chest. Instead of taking anaesthesia for the procedure, he deeply immersed himself in reciting verses from the Ramayana, and felt no pain at all. Such was his divine attachment to the Lord and his unswerving detachment from bodily needs.

Srimad Akkur Andavan was renowned as one of the greatest exponents of Ramayana. Thousands would attend his divine discourses at that time.  He was highly respected for his simplicity, lucidity and profound knowledge, humorous discourses and deep understanding of scripture. His shishyas and abhimanis (disciples and well-wishers) were so fond of him that they called him ‘Engal Andavan’ or ‘the Andavan who belongs to us’.

At that time, Srimad Akkur Andavan had noted that Thenbirai Venkata Raghavachar Swami, who had been serving him and undergoing kalakshepams, was adorned with many spiritual qualities. He felt that Thenbirai Swami would be the best successor who could adorn the acharya-pitam of the Andavan Ashramam. Accordingly, he communicated his desire to Srimad Thenbirai Swami, who agreed to accept the renunciate sannyasa order, after much deliberation.

Both acharyas, namely Srimad Akkur Andavan and his successor Srimad Thenbirai Andavan were together in the Ashramam for a period of about five and half months. Srimad Akkur Andavan departed to adorn thirunaadu on 19th March 1947, corresponding to the tithi (lunar day) of  Krishna-paksha-dvadashi  in the Tamil month of Panguni of the sasti-samvatsara year of Viva.