“I pay my obeisances unto Srimad Padukasevaka Ramanuja Mahadesikan (Chinnandavan), the greatest of spiritual preceptors, who is verily an ocean of compassion; who acquired the esoteric knowledge of ubhaya-vedanta from the gem of spiritual masters Srimad Periandavan, who himself was the combined incarnation of Sri Nathamuni, Sri Yamunamuni and Sri Ramanuja muni; and who had his bhara-samarpanam (ritual surrender) conducted at the divine lotus feet of the Supreme Lord Sri Ranganatha by the same Srimad Periandavan.” 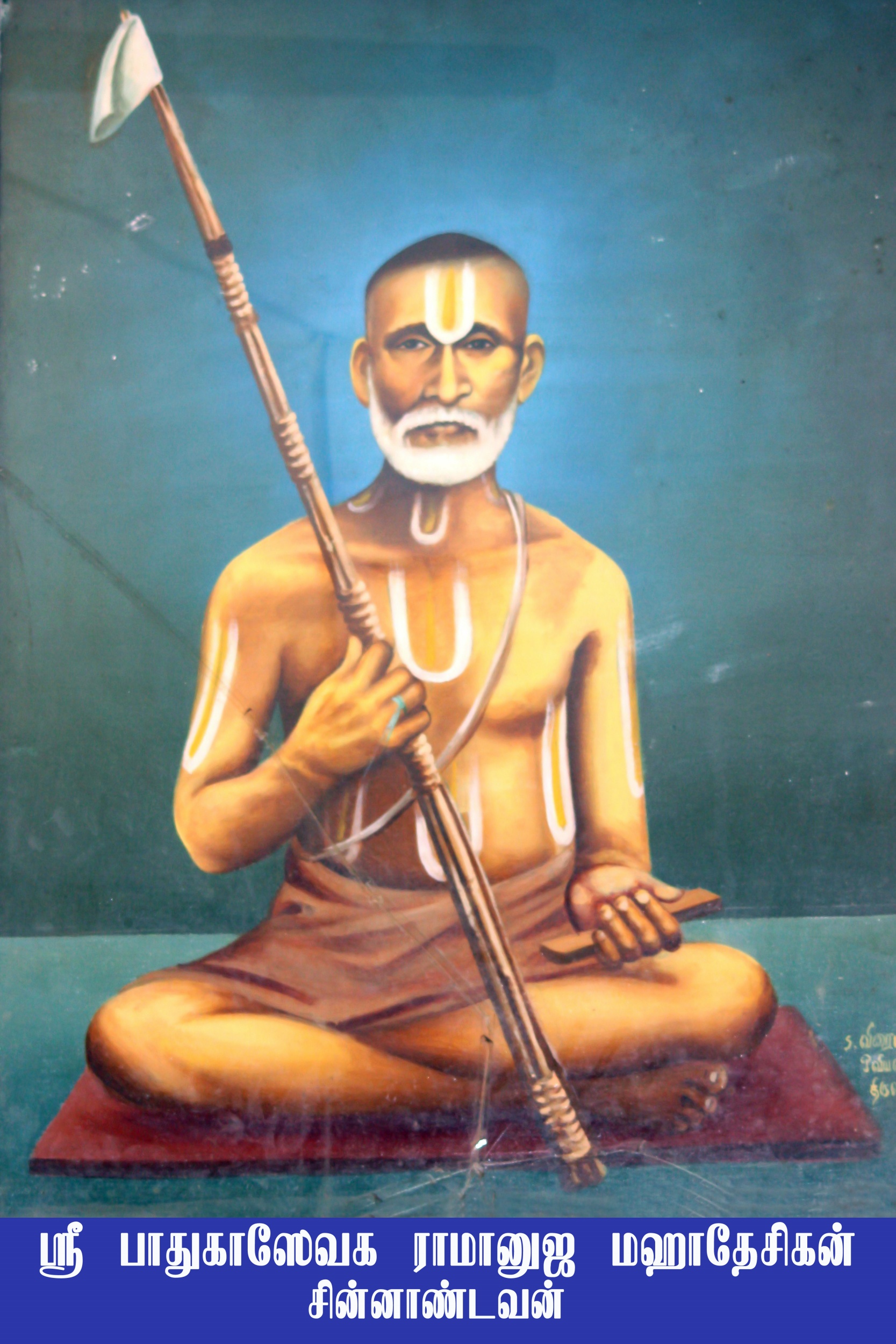 Srimad Sri Chinnandavan Sri Paduka Sevaka Ramanuja Mahadesikan was born in 1828 CE, corresponding to the sashti-samvatsara year of Sarvadhari in the Tamil month of Karthigai under the star of Magam in a village called Veliyanalloor.

He was born in Shatamarshana Gotra to Sri Krishna Thathacharya, who named his son, Srinivasa Raghavan. It is a great coincidence that two other acharyas in the illustrious Andavan lineage were also called Srinivasa Raghavan at birth, before they accepted the renunciate sannyasi order: namely, Srimad Periandavan who was Srimad Chinnandavan’s immediate predecessor, and Srimad Thirukudanthai Andavan, who was instrumental in spreading the Andavan sampradayam (tradition) across the length and breadth of the country to reach dizzy heights of glory.

After his upanayana-sanskara was done at the right age by his father, Srinivasa Raghavachar studied veda-adhyayanam (formal study of the Vedas) and learnt kavya-alankara-granthams (decorative poetry).

Later he travelled to Mysore and learnt nyaya (Vedic epistemology and methodology) , tarka (logic and debate) and advaita (monism) under the tutelage of the Aasthana Vidwan of the Royal Court of the Mysore Maharaja, Sri Rama Shashtri. He was so brilliant in his learning that he was able to clear even his teacher’s doubts, and thus earned his awe and accolades.

After completing his studies in Mysore, he proceeded to Srirangam to take shelter of the divine lotus feet of Srimad Periandavan who was the acharya of Srimad Andavan Ashramam at that time. He requested Srimad Periandavan to accept him as a disciple and teach him sampradaya-granthas (canonical texts of Sri Vaishnavaism).

Srimad Periandavan who a paragon of many virtues such as jnana (spiritual knowledge) and vairagya (detachment from the material world) accepted Srinivasa Raghavachar as his disciple after witnessing his modesty and knowledge of the shastras (scriptures). After completing his grantha-chatushtya-kalakshepams (personal tutelage of the four main texts of Sri Vaishnavism), and learning the Shata-dushani, he returned to Vellianallur.

Sri Srinivasa Raghavachar lived a life of regimental discipline in Velinalloor, observing the rules of pancha-kala anushtanams of a Sri Vaiishnava paramaikanti. At that time, Srimad Periandavan had become very weak due to his severe austerities and penances. After making several tests, Srimad Periandavan decided that Sri Srinivasa Raghavachar Swami would be the best person to succeed him.

When his health continued to deteriorate, Sri Srinivasa Raghavachar Swami went back to Srirangam and prostrated before Srimad Periandavan. With great modesty, he described the qualifications necessary for taking up the renunciate order of sannyasa, thereby indicating to Srimad Periandavan, his readiness for accepting the order.

Srimad Periandavan was filled with extreme happiness to have chosen the right successor,. On an auspicious day, he granted the sannyasa order to Sri Srinivasa Raghavachar Swami, and awarded him the name: Sri Paduka Sevaka Ramanuja Mahadesikan.

Since both were Acharyas together at the same time, they were fondly called Periandavan and Chinnandavan by the shishyas and admirers alike. Just four months later, Srimad Periandavan departed to adorn thirunadu (the divine abode of the Lord), and Srimad Chinnandavan succeeded him as the fourth pontiff of the Srimad Andavan Ashramam.

Srimad Chinnandavan’s travels included a grand visit to Kanchipuram from Srirangam, where he delivered a series of  sampradayik-pravachanams (spiritual discourses) on the way, attended by thousands of shishyas and abhimanis (disciples and well-wishers).

Srimad Chinnandavan departed to adorn thirunadu at age of 68, leaving behind grieving disciples in the year 1895, corresponding  to the sashti-samvatsara year of Vijaya on the tithi (lunar day) of Shukla Saptami in the Tamil month of Thai, after observing ten chaturmasyams.