“May Srimad Srinivasa Ramanuja Mahadesikan (Kadanthethi Andavan), a jewel amongst renunciate sannyasis, benedict us with the topmost spiritual prosperity. Due to the incessant and compassionate glance of Srimad Periandavan, he hovered like a bee sipping the knowledge of ubhaya-vedanta, which emanated like a stream of honey from the acharya’s lotus feet. It was by the same acharya (Srimad Periandavan) that he was awarded bharanyasam (ritual surrender) at the divine lotus feet of the Supreme Lord Sri Ranganatha.” 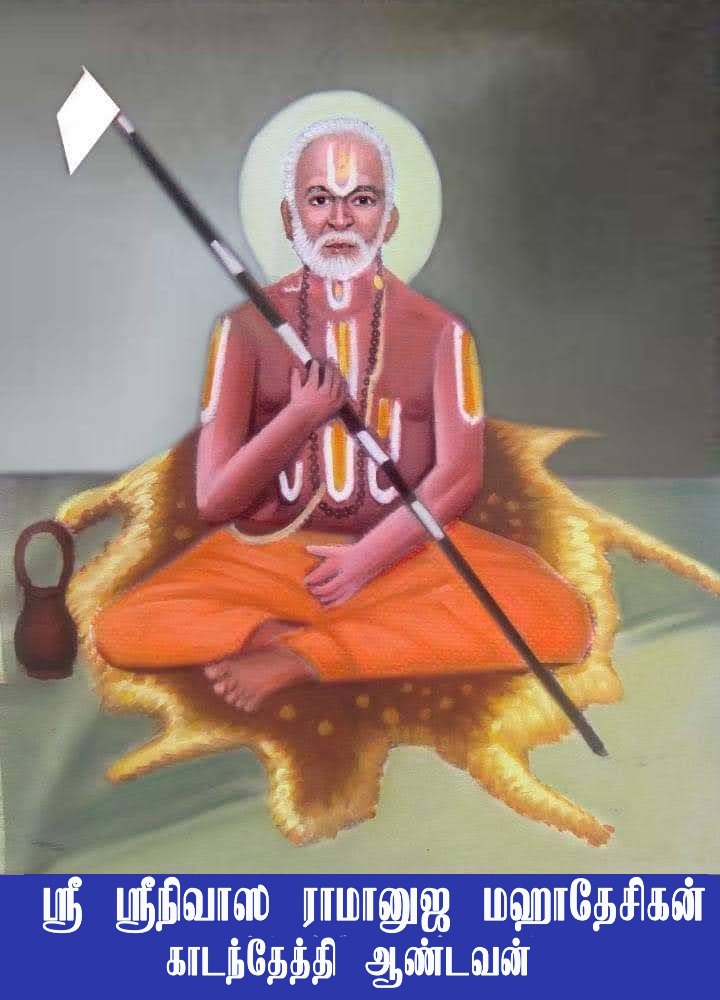 Srimad Kadanthethi Andavan Sri Srinivasa Ramanuja Mahadesikan was born in 1829 CE in the sashti-samvatsara year of Virodhi in the Tamil month of Avani under the star of Mulam, in a village called Kadanthethi, just south of the river Kaveri. His parents Srimathi Janaki Ammal and Sri Raghunathachar named the child Sri Varada Vedantachar.

Sri Raghunathachar was performing kainkaryams (services) to Srimad Thiruthuraipoondi Andavan  at that time. After his sacred thread ceremony was conducted, the young Varada Vedantachar studied the Vedas, Upanishads and tarka (logic and debate) at Rajamannar Koil under the tutelage of Sri U.Ve. Samiyachchar Swami.

Sri Varada Vedantaachariar meditated on the sacred mula-mantra and gayatri-mantra vigorously from a young age with great detachment and determination, and soon attained mantra-siddhi the state of perfection in chanting and understanding the inner mysteries of the mantra.

His memory was astoundingly strong that he acquired a skill called shatavadana-shakti: the ability to perform hundred tasks simultaneously by simply remembering them mentally. Due to his unparalleled poetic prowess, he was also known as an Asu-kavi.

Sri Varada Vedantachar was married at the age of 35. Immediately after his marriage, he started on a pilgrimage and visited various holy places and ashramams.

At Nagapattinam, the Tahsildar Sri Rangaswamy Nayakkar requested Sri Varada Vedantachariar to display his shata-vadhana. He displayed his shatavadana skills at the shrine of Lord Velipalayam Krishna, where the crowds that had thronged to see him were wonderstruck by his memory.

At Tirumala, he was once gifted an ivory palanquin, which he later donated to the shrine of Swami Desikan at Tirucherai. He stayed in Tirupati till he completed 60 years, and decided to live in Thirukkudanthai after that.

Accordingly, he purchased a house near the Sri Aravamudhan temple in Thirukudanthai and stayed there. He did many great services and offered inumerable gifts to the Deities there. He was so devoted to Srii Komalavalli Thayar, the consort of Sri Aravamudhan that he donated a silver simha-vahana a lion-shaped seat to carry the Mother Goddess, and a set of golden karas (bangles).

Srimad Varada Vedantachariar Swami composed many masterpieces such as Adbhuta Vimana, Aarat Prabandham and Svapna Shatakam. The Adbhuta Vimanam was composed when he was challenged to create something similar to Tirukkural by his friend, Tahsildar Sri Rangaswamy Nayakkar. The Svapna Shatakam is composed of a hundred verses in praise of Sri Venkateswara of Tirumala. Unfortunately, the text of the Arat Prabandham seems to be lost and unavailable today.

When his eyesight had weakened considerably due to old age, he composed a poem called Sri Komala Dandakam in praise of the Goddess of Thirukkudanthai. As soon as he finished reciting this prayer in front of Komalavalli Thayar, he regained his vision completely.

Srimad Chinnandavan departed to adorn thirunadu at the age of 68 leaving behind grieving disciples in the year 1895. After a gap of eleven years when the Andavan Ashramam did not have an acharya, the disciples approached Srimad Varada Vedantacharya after observing his innumerable good qualities, and requested him to become their acharya to continue the Andavan sampradayam.

Sri Varada Vedanthachariar was already 76 years old at that time. However, he decided to accept the renunciate sannyasa order with two intentions in his mind: to satisfy the longing of the disciples of the Andavan sampradayam for an acharya; and to appoint Therazhundur Srimad Varadachariar as the next Andavan at an appropriate time.

Accordingly, arrangements were made for his ashrama-svikaram (acceptance of the sannyasa order). His Holiness the 38th Jeeyar of Ahobila Mutt, Srimad Srinivasa Shatagopa Yatheendra Mahadesikan (also known as Srimad Thirukkudanthai Azhagiyasingar) awarded him the preksha-mantra (a prerequisite for accepting sannyasa)/ Thus, he became the 5th pontiff of the Srimad Andavan Ashramam in the Tamil month of Avani in the year 1905 in front of thousands of disciples and well-wishers. He accepted the name Srinivasa Ramanuja Mahadesikan, and was popularly called Srimad Kadanthethi Andavan.

However, Srimad Kadanthethi Andavan’s health continued to deteriorate due to old age. Sometimes, he would faint and lose consciousness during his discourses. In 1908, when Srimad Andavan’s health continued to worsen, he awarded the sannyasa order to Therazhandur Sri Varadachar Swami with the name Srimad  Vedanta Ramanuja Maha Desikan  (later known as Srimad Nammandavan), as his successor.

Both the acharyas were together for a period of 6 months. Srimad Kadanthethi Andavan departed to adorn thirunadu on 17th February 1909, corresponding to the tithi (lunar day) of  Krishna Paksha-Dwadashi in the month of Masi in the year called Kilaka.