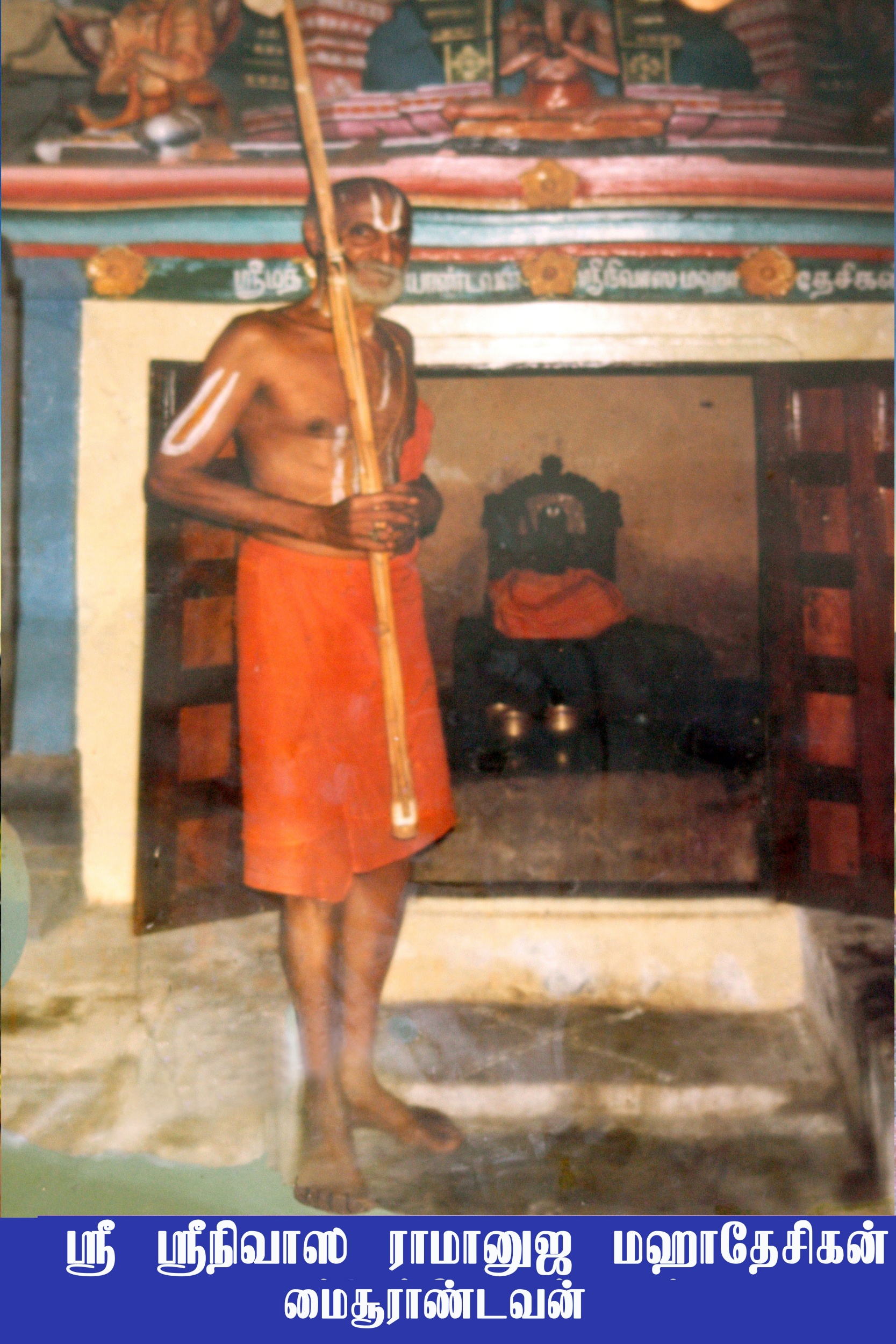 His Holiness Srimad Mysore Andavan Srinivasa Ramanuja Mahadesikan was born as Sri Hariharapuram Gopalacharya on 19th August 1909 (the   year of Saumya in the Tamil month of Avani in the star Uttara-phalguni) to Sri Krishnamacharya and Smt Ranganayakamma in Sosale village, T Narasipura Taluk, Mysore district.

Srimad Gopalacharya lived in a village called Sosale and studied in the primary school there. His father passed away after an epidemic of plague during his early childhood, after which the family was placed in an unstable financial position.

Recognising the budding scholarly abilities of Srimad Gopalacharya, elderly scholars in the region persuaded him to join the renowned Mysore Maharaja Samskruta Patashala to refine his studies.

Accordingly, Srimad Gopalacharya Swami completed  his higher studies in sahitya and vyakarana (Sanskrit literature and grammar) by completing all the higher examinations in philosophy(Vedanta)  and obtaining a Vidvat-prashasti degree in Sanskrit. He also completed his Hindi Pandit and Kannada Pandit examinations, and attained proficiency in the Divya-prabandhams and the Vedas, the dual-canonical literature of the Sri Vaishnava tradition.

During his student days, he was not able to sustain his daily needs due to his unstable financial condition. However, the great acharya Sri Abhinava Ranganatha Parakala Swamy, who adorned the seat of the Parakala Matam at that time,  noticed the brilliant boy, and provided him with necessary support, including his daily meals.

His brothers joined him in Mysore, where they too were able to complete their higher studies by the grace of Lord Lakshmi Hayagriva, the presiding Deity of the Parakala Matam.

Later, Srimad Gopalacharya Swami  married Srimati Jayalakshmi from Talakadu, who belonged to a respectable family. The couple were blessed with six daughters and two sons.

Srimad Gopalacharya worked hard towards the improvement of the Sri Srinivasa Venugopalaswamy temple at Sosale. He successfully completed the studies of the Upanishads and grantha-chatushtaya-kalakshepam (personal tutelage of the four main esoteric texts of Sri Vaishnavism) under Srimad Akkur Andavan.

Srimad Gopalacharya served in a high school at Sakleshpura (Karnataka) and thereafter he came to Mysore and served as Sanskrit teacher in Mahajana High School (1945-1975).

When the presiding head of the Andavan Ashramam, Srimad Thenbirai Andavan became indisposed due to his age, he awarded the preksha-mantra (a pre-condition for becoming a renunciate sannyasi) and  mokshashrama-ahnika-anushtanam (rules for observing the sannyasa order) to three  senior scholars of the Ashramam:  Sri U. Ve Kannan Swami (who later became Srimad Thirukkudanthai Andavan); Sri U Ve Gopalacharya Swami (who later became Srimad Mysore Andavan); and Mannargudi Ganapadi Vidvan Sri U. Ve Sri Narasimhacharya Swami. Srimad Thenbirai Andavan impressed upon them to be ready to take the sannyasa order at any time, when called upon.

Srimad Gopalacharya Swami had been nominated as the alternate candidate to become the ninth peetadhipathi to succeed Srimad Thenbirai Andavan in April 1963, in case Srimad Kannan Swami had been prevented by circumstances to accept the   order for any any reason.

However, by the sankalpam (divine will) of the Lord, U. Ve.Kannan Swami ascended the acharya-pitam of the Andavan Ashramam and became the ninth pontiff. Sri Gopalacharya Swami  was appointed as the Srikaryam (the administrative head, who is second only to Srimad Andavan himself) of the Srimad Andavan Ashramam by Srimad Thirukudanthai Andavan, and continued to serve in that capacity for almost 2 decades.

As Srikaryam of the Srimad Andavan Ashramam, Srimad Gopalacharya Swami accompanied Srimad Thirukkudanthai Andavan in all his travels on foot (pada-yatra) all over India, especially to the holy place of Badrikashram.

Srimad Gopalacharya Swami  was an ashu-kavi (master poet) of the highest calibre, and used to compose prabhandams (verses) spontaneously.  He also wrote scholarly articles in various journals and magazines. In recognition of his outstanding contributions to Sanskrit literature, Srimad Gopalacharya Swami was recognized with several awards by the state and central governments, including the prestigious President’s Gold Medal.

After Srimad Thirukudanthai Andavan departed to adorn thirunadu, Srimad Srinivasa Ramanuja Mahadesikan was appointed his worthy successor, and became the 10th pontiff of the Srirangam Srimad Andavan Ashramam at the age of 79.  He was popularly known as Srimad Mysore Andavan.

However, the health of Srimad Mysore Andavan deteriorated quickly due to repeated debilitating strokes of cerebral thrombosis. Even through ill-health, Srimad Mysore Andavan  used to remember and fluently recite the verses that he had composed six decades earlier.  With the blessings of the divine padukas, Srimad Mysore Andavan’s mental faculties and  speech were not affected despite his debilitating condition, and he would still move freely to  perform his daily rituals such as perumal and paduka aradhanam daily and recite the verse of sevakalams fluently. He had started doing this earlier  when the senior acharya Srimad Thirukkudanthai Andavan had been indisposed.

Just 42 days later, Srimad Mysore Andavan too departed to on 22nd May 1989 at 3:10 AM. It was krishna-paksha dvitiya-tithi in the Tamil month of Vaikasi in the sashti-samvastara year of Shukla.

Srimad Mysore Andavan’s kalyana-gunas (auspicious qualities) were many. Indeed he was a rare combination of jnanam, shantam, virakti, vairagyam, anagham and anushthanam. His acharya-bhakti was so unshakeable and steady that it had to be experienced to be believed. Words cannot describe  the saintly nature of Srimad Mysore Andavan, which could only be experienced by disciples and well-wishers who loved and adored him with devotion.