“I  seek refuge in Srimad Vedanta Ramanuja Mahadesikan (Srimad Nammandavan), the king amongst ascetics, who is decorated with spiritual knowledge that is deep like the ocean; who offered repeated prostrations at the lotus feet of Srimad Periandavan from a young age; on whose order,he studied the esoteric texts of the ubhaya-vedanta at the holy feet of Srimad Chinnandavan, who also ordained his bhara-samarpanam (ritual surrender); and who was initiated into the renunciate sannyasa order by Srimad Kadanthethi Andavan.” 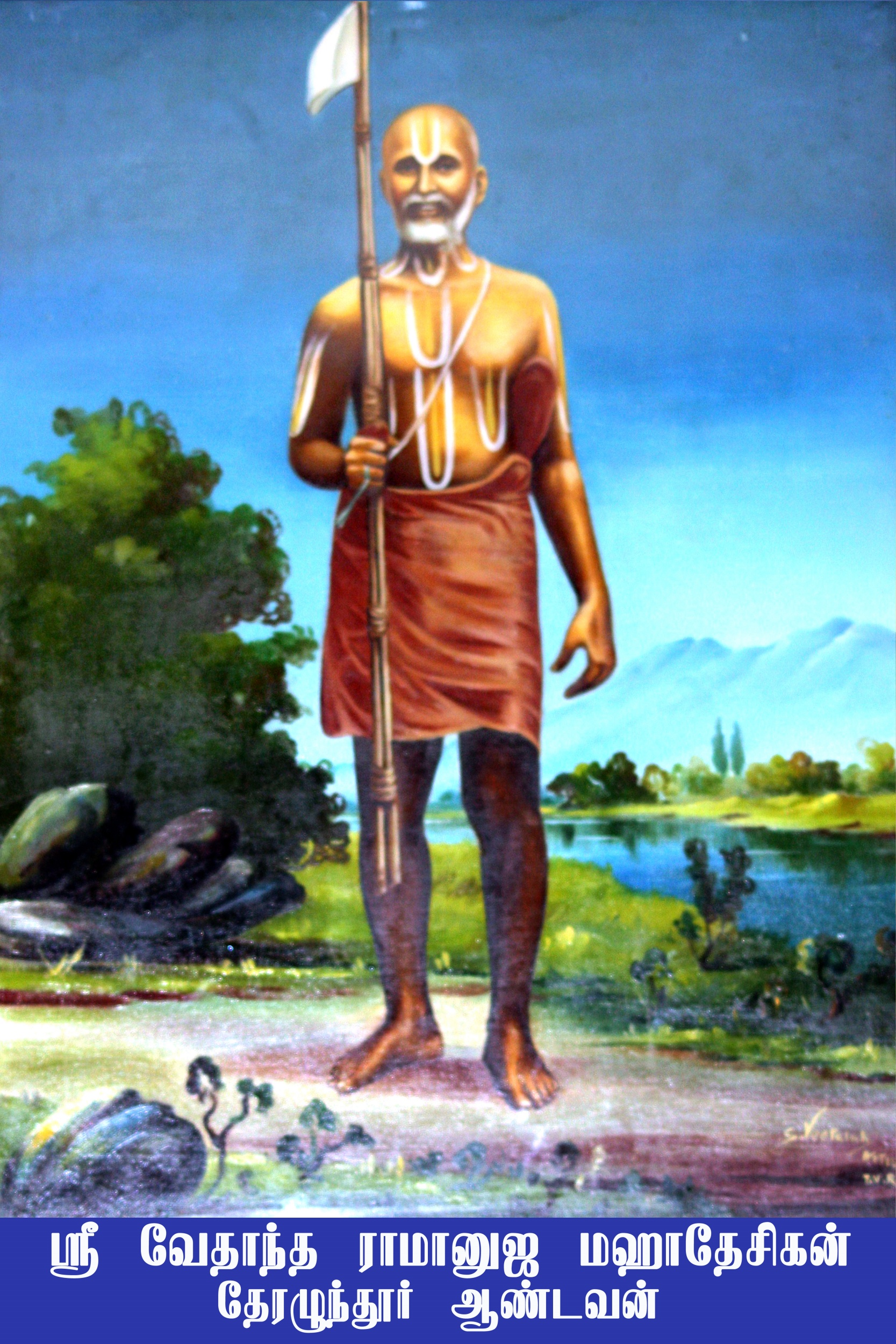 His Holiness Srimad Nammandavan Sr Vedanta Ramanuja Mahadesikan was born in 1872 in the village of Therazhundur in Thanjavur. The day corresponded to the sashti-samvatsara year of Prajotpati in the Tamil month of Avani under the star of Poorattadhi. At birth he was given the name Varadachar. Sri Varadachar Swami  belonged to the lineage called Eyunni Vamsham (lineage) of Bharadwaja Gotra (clan).

He was trained in veda-adhyanam (study of the Vedas),  kavyam (rhetorical poetry) and nataka-alankaram (decorative play-writing) from a young age.  Later, he travelled to Srinrangam to pursue higher studies.

In Srirangam, he immediately offered his obeisances at the feet of Srimad Periandavan, who blessed Srimad Varadachariar with pancha-samskaram (the five-fold initiation into the Sri Vaishnava order).

He was married at the age of 18 years to Sowbhagyavati Sengamala Ammal, daughter of Sri Annasami Ayyangar from Thirukkudanthai Ayyangar street.

One day, Srimad Chinnandavan called Srimad Varadachar Swami and told him, “You are going to be the sampradaya-pravarthakar (guardian of the tradition) of this Ashramam.”

Srimad Chinnandavan’s health deteriorated thereafter, and he departed to adorn thirunadu (the divine abode of the Lord) without appointing a successor in the Tamil month of Thai in the year 1895..

After this,  Sri Varadachar Swami purchased a house at Srirangam and lived there with his parents and wife. Everyday, he would visit the brindavanam-shrines of the previous acharyas in the morning and only return late in the night after performing various services such as aradhanam (ritual worship of the Deity and the padukas), offering of lamps, and  parayanams (ritual chanting).

Accordingly,  Srimad Srinivasa Shatakopa Yatheendra Maha Desikan, the 38th pontiff of the Ahobila Mutt, who was camping nearby at Narasimhapuram, awarded the sannyasa order to Kadanthethi Swami in the presence of a large Srivaishnava gathering. Thus 76 year old Kadanthethi Swami became the next pontiff of the Srimad Andavan Ashramam with the name, Sri Srinivasa Ramanuja Maha Desikan, and became known as Srimad Kadanthethi Andavan.

He received the ochre robes of the sannyasa order from the holy hands of Srimad Kadanthethi Andavan in October 1908 in the Tamil month of Avani in the sashti-samvatsara year of Kilaka, and accepted the name, Srimad  Vedanta Ramanuja Maha Desikan. He was called Srimad Therazhundur Andavan and also became known fondly as Srimad Nammandavan.

Both the Acharyas were together for a period of 6 months. Srimad Kadanthethi Andavan departed to adorn thirunadu on 17th February 1909, corresponding to the tithi (lunar day) of  Krishna Paksha-Dvadasi in the month of Masi in the year called Kilaka.

Srimad Nammandavan observed strict austerity and the puritanly simple and rigorous life of a sannyasi in the footsteps of his purvacharyas (previous preceptors). He was very detached from his bodily needs and rejected any luxury or convenience, preferring simplicity at all times.

He travelled to many holy shrines to spread the glories of the sampradaya, but always prefered to travel by foot. He was blessed with a majestic personality, a pleasing voice, and the ability to convince everyone with ease. His discourses were full of humour and wit, but still carried the weight of spirituality. He spoke with penetrating perception of  the holy lives of azhwars and  the Lord’s incarnations.

His lectures on holy texts such as the Sri Bhashya, Bhagavad Vishyam and Rashasya-traya-saram were so eloquent and penetrative that he attracted all sections of Vaishnavite community around him, including several Vedic scholars and Vedantis.

His disciples were so fond of him that they drew a comparison with Lord Ranganatha: just like the Lord of Srirangam was fondly called ‘Namperumal’ (the Lord who belongs to us); the senior most of the azhwars was called Nammazhwar (the azhwar who belongs to us), similarly the crest-jewel amongst acharyas, was befittingly called Nammandavan .

His holiness departed to adorn thirunaadu in 1931 shortly before the celebrations of his sashti-abdha-poorti (60th birth anniversary) in the year named Prajotpati on the tithi of Krishna Panchami in the Tamil month of Adi.