“I seek refuge under Srimad Srinivasa Mahadesikan (Periyandavan) who is a treasure-house of sreyas (spiritual opulence); who undertook his bhara-samarpanam (ritual surrender) at the divine lotus feet of the Supreme Lord, Sri Ranganatha by the grace of Srimad Vazhuthur Andavan Sri Vedanta Ramanuja Mahadesikan; and who skillfully acquired the esoteric knowledge of ubhaya-vedanta from Srimad Thiruthuraipoondi Andavan Sri Srinivasa Ramanuja Mahadesikan, in whose heart reside the personification of the Vedas.” 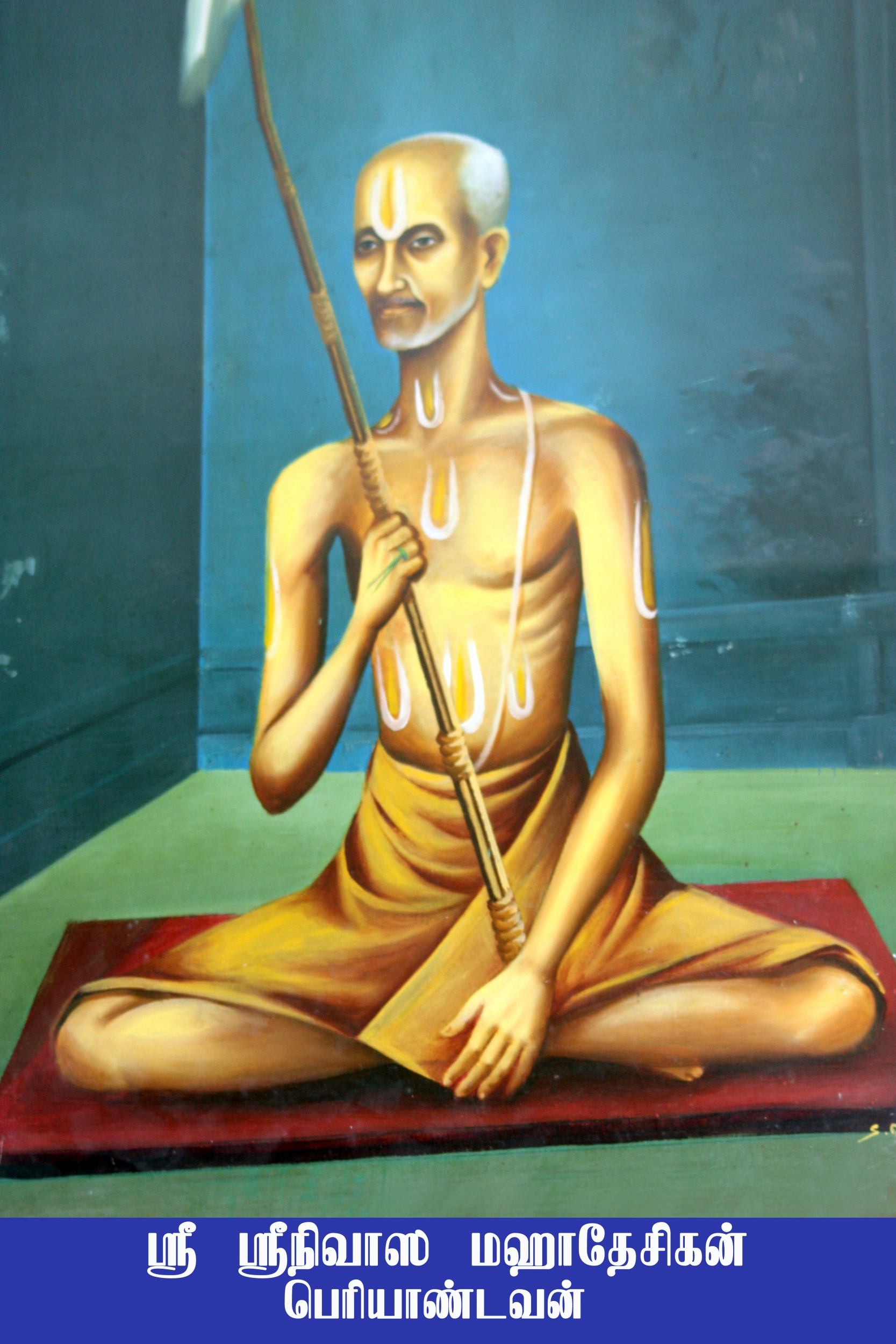 Srimad Srinivasa Mahadesikan Sri Periandavan was born with the name Srinivasaraghavachariar on 25th February 1801, in the year Roudri in the month of Masi under the nakshtram of Pushyam in a village called Piliyaranai near Kanchipuram. Before he turned ten, he had already mastered the rendering of the Sama Veda, which he had learnt from his  father, Sri Krishnamachariar.

Sri Krishnamachariar was extremely pleased with his son’s progress and took the young boy back to Kanchi . There, Srinivasaraghavachariar learnt the tenets of nyaya, mimamsa and vyakarana (Vedic epistemology, ontology, logic and grammar) under the tutelage of great Vedic scholars.

Thereafter, he went to Srirangam where he approached and prayed to Srimad Vazhuthoor Andavan to award sharanagati (ritual surrender). Srimad Andavan immediately performed  the ceremony of bhara-samarpanam for him in the presence of the Lord Ranganatha inside the main shrine of the Srirangam temple.

After he had undertaken sharanagati, Srinivasaraghavachariar humbly prayed to Srimad Vazhuthoor Andavan to tutor him on sampradaya-granthams (esoteric texts) of the Sri Vaishnava tradition through the established process known as kalakshepam. Srimad Vazhuthoor Andavan requested Srimad Thiruthuraipoondi Andavan to carry out the holy task of performing kalakshepams to Srinivasaraghavachariar on the rahasyas and rahasyarthas (inner mysteries and the deeper meaning of the inner mysteries) of the  four main esoteric texts of the sampradaya: the Rahasya-traya-saram, Bhagavad-vishayam, Gita Bhashyam and Sri Bhashyam.

After Srinivasaraghavachariar  completed his kalakshepams, he prayed to Srimad Thiruthuraipoondi Andavan to award him turiyashrama – the renounced order of life. However, many of his close family members objected to his desire to become a sannyasi at such a young age. Therefore, Srimad Andavan requested Srinivasaraghavachariar to return to Kanchi and  become a grihastha (a family man) for some time, and to come back after begetting children.

Immediately after a girl was born to him in his grhastha asrama, Srinivasaraghavachariar Swami felt that he had fulfilled his acharya’s desire, and returned to Srirangam. He once again requested his acharya to award him sannyasa. After testing him in several ways, Srimad Thiruthuraipoondi Andavan finally awarded him sannyasa, and  gave him the title: ‘Srimad Srinivasa Mahadesikan’.

In the year 1828, after Srimad Thiruthuraipoondi Andavan departed from this world to adorned thirunadu, Srimad Srinivasa Mahadesikan ascended the acharya pitham of the Srimad Andavan Ashramam. He resided in Srirangam at Periashramam and was fondly served by shishyas and abhimanis (disciples and well-wishers) alike. They started calling him ‘Periandavan’ out of their respect and affection, and thus he became known by that name.

Srimad Periandavan was the personification of vairagyam – renunciation. Every month he would select just seven or eight days to visit the houses of Sri Vaishnava householders for uncha-vritti, and whatever grains were collected were the only bhiksha he would eat. He would take rice given during uncha-vritti, wash them in the Coleroon river near Periashramam, and consume the cooked rice just with a few tulasi leaves. On other days, he would simply eat powdered fig leaves that had fallen from trees. Such was his unparalleled vairagyam. He had grown so thin due to his strict vows, that he was sometimes called Kattai Swami – or one who looked like a wooden stick.

Srimad Periandavan  observed fifty-five chathurmasyams and adorned the acharya pitham for that many years. He departed to adorn thirunadu in the the year 1884, corresponding to sashti-samvastara year of Subhanu on krishna-trayodashi tithi of the Tamil month of Thai.