“We prostrate and seek refuge at the divine lotus feet of Srimad Ranga Ramanuja Mahadesikan (Srimushnam Andavan) who had his bhara-samarpanam (ritual surrender) conducted at the holy feet of Srimad Thirukudanthai Andavan Sri Vedanta Ramanuja Mahadesikan. With resolute determination, he gained the wealth of the knowledge of ubhaya-vedanta from his acharya, at whose lotus feet, he whirs like a honeybee.” 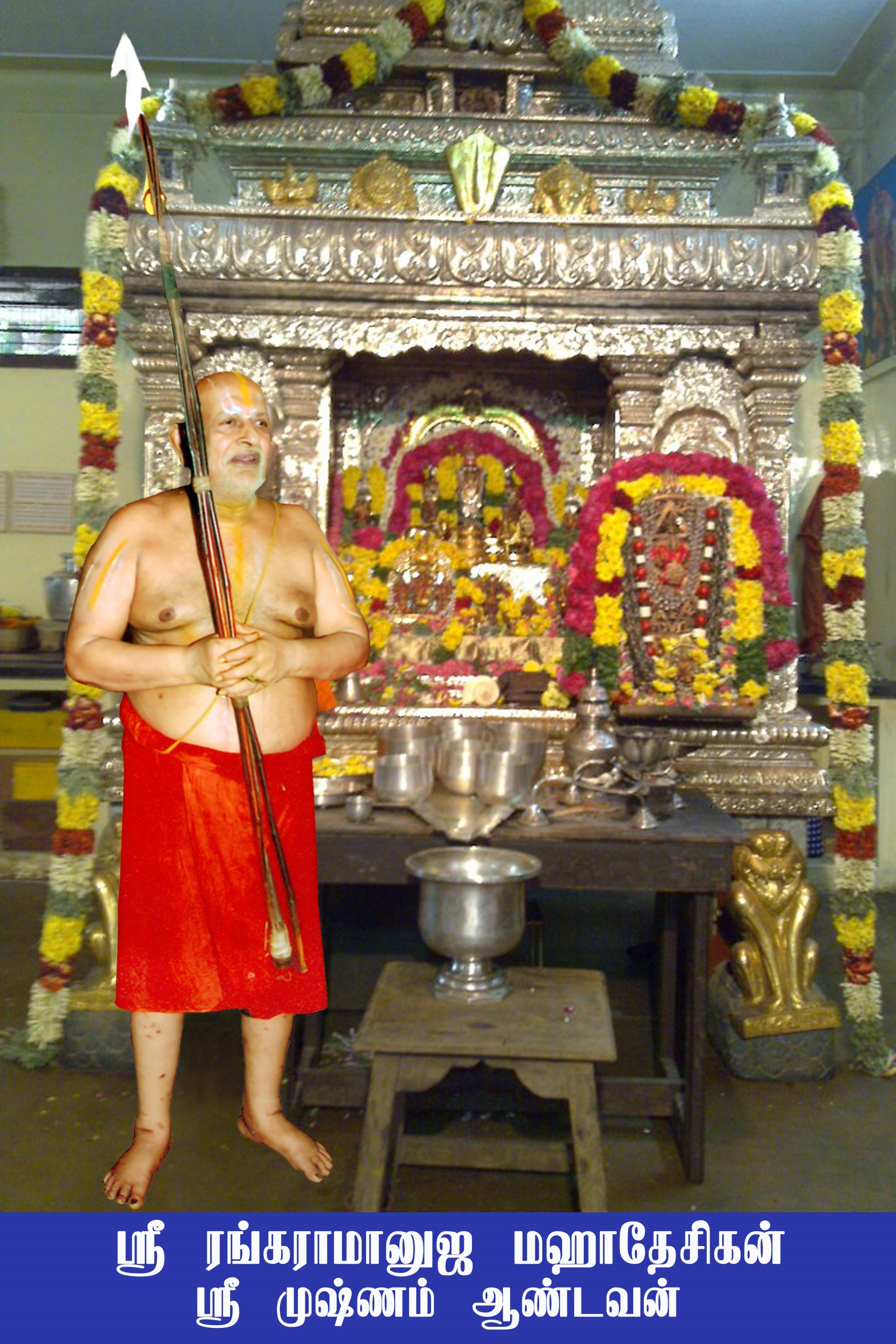 Srimushnam Andavan was born in Srimushnam, a svayam-vyakta-kshethra in Cuddalore District of Tamil Nadu, on 3rd June 1935 to Sri U. Ve. Srinivasachariar and Srimati Kumudhavalli. He was born under the star or thirunakshatram of Ardra (Thiruvathirai) in the Tamil month of Vaikasi in the shasti-samvatsara year of Yuva.

His family belongs to an illustrious lineage of svayam-acharya-purushas, or preceptors tracing back to one of the 74 disciples of Bhagavad Ramanuja. His great great-grandfather Sri Nadu Nattu Narayanachar was the prime disciple of Annarya Maha Desikan. At birth, Srimad Srimushnam Andavan was given the name Varahachariar. Varahachariar’s upanayadhi samskara or the sacrament of the holy thread  was performed at the right age.

Sri Varahachariar Swami’s father was a disciple of Sangeeta Kalanidhi late Tiger Varadhachar Swami. Young Varahan used to sit by the side of his father during those music lessons and assimilated the nuances of Carnatic music to an astonishing degree which enabled him to sing classical ragas with a mellifluous voice.

Sri Varahachariar Swami learned the intricacies of the Vedas and Divya-prabandhams from a young age. His Uncle Sri U. Ve Srimushnam Puranam Narayanachar taught him Sanskrit texts on  kavya (rules of composition of poetry) and nataka-alankara (rules for decorative play-writing).

Sri Varahachariar Swami studied at the Kakumani Charity Patashala (affiliated to Madras University) in Chennai for his initial education in Vedic scriptures.

Later, Sri Varahachariar Swami learned nyaya (Vedic ontology and epistemology) and tarka (logic). He qualified himself as Tarka Shiromani under great teachers in the Sriperumbudur Sanskrit Patashala such as Sri Krishna Desika Thathachariar (father of the great N.S.R. Swami) and others.

Many learned and wise men who had observed Sri Varahachariar Swami’s remarkable knowledge and scholarly brilliance,  had predicted that he would become a maha-vidvan (brilliant scholar) and a sampradaya-pravartaka (guardian and preceptor of the Sri Vaishnava tradition).

After his studies, Sri Varahachariar Swami stayed in Andhra Pradesh and taught in Sanskrit colleges located in Jeedikal and Alwal, close to Hyderabad for a few years. His lucid and brilliant teaching earned a lot of accolades and he learnt to speak and read Telugu very fluently.

Sri Varachariar Swami came back to Sriperumbudur and passed the Tamil Vidwan exam. He  served in the Tamil Nadu Government educational service for 27 years. He lived and taught in Malayankulam for many years. Later, he settled down at Velamur, the birthplace of Upanishad Bhashyakarar HH Sri Ranga Ramanuja Mahadesikan.  Sri Varahachiar Swami renovated and maintained the temple in Velamur single-handedly, and regularly performed nitya-aradhana (daily worship of the Deity) to serve the Divya-dampati.

His Holiness the 44th Jeer of Sri Ahobila Mutt once conferred a special sambhavanai (an honorarium) in appreciation of Sri Varahacriar Swami’s extraordinary knowledge, learning  and lucid presentations of the teachings of Sri Vaishnava acharyas.

Around that time, Srimad Thirukkudanthai Andavan received a divine message from Sri Ranganatha Padukas: “Srimushnam Varahachariar Swami will be your successor. Be assured that this Paduka Ashramam so beautifully nurtured by you, will be safe in his hands and will reach much greater heights.”

Thus he had indicated to Sri Varahachariar that he should prepare himself to become his successor, probably knowing in advance that his immediate successor H.H. Mysore Andavan may not live long.

Millions of disciples were worried about the future of the Andavan Ashramam and its acharya-parampara. When senior disciples of the Ashramam approached Sri Varahachariar Swami and requested him to adorn the acharya-pitam, he remembered his own acharya’s instructions, and whole-heartedly accepted the call to the religious order even though he had a large family to support.

Exactly on the 10th day after the departure of His Holiness Srimad Mysore Andavan, on 1st June 1989 (coinciding the Tamil date of Vaikasi 19th in the sashti-samvatsara year called Shukla), and in accordance with the holy command of His Holiness Srimad Thirukkudanthai Andavan, Sri Varahachariar Swami accepted the renunciate sannyasa order and donned kashayam (ochre ascetic robes of the sannyasa order) at the shrine of the illustrious purva-acharya of Andavan Ashramam, Srimad Andavan.

His Holiness was a versatile exponent in many arts and sciences such as sculpture, music, alankara-shastra (decorative arts), astrology, construction, Ayurveda and others, besides excelling in Vedanta and vyakarana. It was also well known that His Holiness spoke with slesha (humorous puns) at appropriate moments with precise timing and inordinate wit.

He was well-versed in most of the poetic and classical literature of Tamil, and would openly quote from the writings of Thiruvalluvar, Kamban, Ilango and Bharathi in his anugraha-bhashanams or divine sermons.

Once His Holiness transformed a saligrama-sila that was slightly broken by sculpting it into the beautiful form of Lakshmi Hayagriva Perumal. Srimad Andavan also delivered many anugraha-bhashanams in Telugu for the benefit of shishyas and abhimanis (disciples and well-wishers) who understood that language.

His Holiness initiated several efforts to spread the message of Sri Vaishnavism and prapatti-marga  as founded by Bhagavad Ramanuja and nurtured by Srimad Vedanta Desikan several centuries ago. He awarded samashrayanam and bharanyasam (initiation to the order of Sri Vaishnavism and ritual surrender to the Supreme Lord), and grantha-chatushya-kalakshepams (personal tutelage of the four main esoteric texts of Srivaishnavism) to thousands of disciples.

His Holiness travelled all over India and offered mangalashasanam prayers to the Lord at most of the 108 Divya-desam temples.

The following are some of the many hymns composed by Srimad Srimushnam Andavan:

His Holiness continued to expand the activities of the Andavan Ashramam in the footsteps of the previous acharyas:

His Holiness Srimad Srimushnam Andavan observed 29 Chaturmasya Sankalpams from 1989 to 2017 and adorned thirunadu in March 2018. He is succeeded by His Holiness Srimad Andavan Srivaraha Mahadesikan, who became the twelfth pontiff of the Andavan Ashramam in October 2018 and continues to uphold the glorious tradition of this divine institution.