“I surrender at the lotus feet of Srimad Vedanta Ramanuja Mahadesikan (Vazhuthur Andavan), who is like a bee hankering for honey at the divine lotus feet of Srimad Gopala Mahadesikan (Thirukudanthai Desikan); who is endowed with a an ocean of auspicious qualities such as  spiritual knowledge, deep detachment and graceful compassion; and who benedicts those who seek his refuge with a shower of beneficial qualities.” 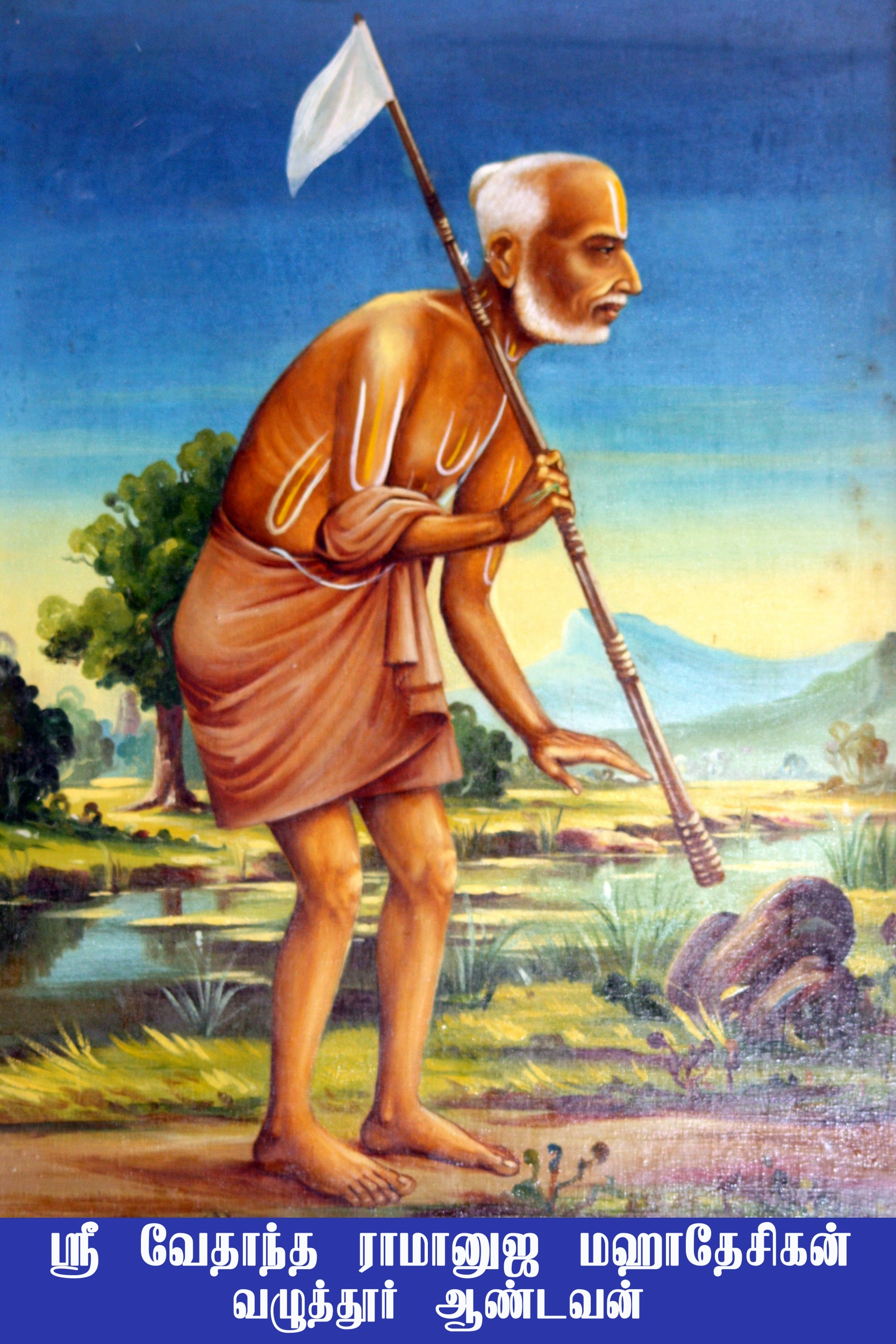 Lord Ranganatha   directed  Srimad Vazhuthur Swami, and two others, Srimad Vatthirayiruppu Swami, and Srimad Seyyanam Swami, to go to Srimad Gopalarya Mahadesikan, also known as Thirukkudanthai Desikan, and learn the sampradaya-granthas or the traditional literature and esoteric mysteries of Srivaishnavism, and to spread it far and wide.

After learning the scriptures at the feet of Thirukkudanthai Desikan, Srimad Vazhuthur Swami accepted the ascetic order of sannyasa, and   came   to   be   known   as Sri Vedanta Ramanuja Mahadesikan. When He was  in  Vazhuthur for   more  than  30  years,  he performed  mangalasasanam  prayers every day at the temple of Sri Jagathrakshaka Perumal. It is well known to many that when the curtain was drawn in front of the Deities of the temple, Vazhuthur Swami used to have a direct dialogue with the Deity.

Later he moved to teach in Srirangam, where he lived in a small hut on the banks of the river Coleroon. He used to award the sacraments of samashrayanam  and  bharanyasam  to thousands of disciples at  the shrine of Sri Ranganayaki in the temple. At that time, he was also known as ‘Srirangam Swami’.

Remembering the causeless compassion and grace of his preceptor, and the unpayable debts to the acharya, Vazhuthur Swami offered his prostrations at the feet of Srimad Thirukkudanthai Desikan and sang one of the verses of Nammalvar from the Thiruvaimozhi which had been written in praise of Sri Aravamudan.

The verse had the sentence: theera vinaigal theera ennai andaai – thirukkudanthai oora (Oh, resident of Thirukkudanthai, you rule over me – andaai – by removing all those faults which cannot be erased!). Srirangam Swami used this verse as a reference to Srimad Thiukkudanthai Desikan and repeated this verse over and over again, with tears brimming from his eyes.

Later, Srimad Vazhuthur Swami Sri Vedanta Ramanuja Mahadesikan returned to Srirangam and proceeded to the temple to serve the Lord. As soon as he arrived, the Deity of Lord Ranganatha Himself came to the flag-pillar or the dvija-stambha at the temple to receive Vazhuthur Swami. Lord Ranganatha embraced him by calling out: “Emmai anadavane, varuga’, which translates as, “Welcome to He who rules over me as andavan’.

Vazhutoor Swami’s acharya and the Divine Lord, had both addressed him with the title of ‘Andavan’. Since then the acharyas of the tradition are known as ‘Andavan’, which is considered to be a title directly awarded by the Supreme Lord Sri Ranganatha Himself.  Thus Vazhutur Swami became famous by the name Srimad Vazhuthur Andavan.

Many illustrious people became sishyas or disciples of Srimad Vazhuthur Andavan Sri Vedanta Ramanuja Mahadesikan. Prominent among them are:

01 –Srimad Thiruthuraipoondi Andavan Sri Srinivasa Ramanuja Mahadesikan, who succeeded him to the acharya-pitam of the Andavan Ashramam

Through these 3 acharyas who were sishyas of Srimath Vazhuthur Andavan, the Andavan Ashramam sampradayam has spread to all over the world like a big banyan tree.